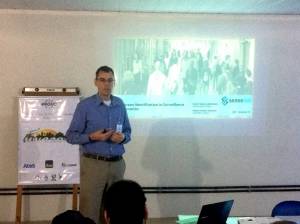 The coordinator of the Smart Sense Laboratory, Professor William Schwartz presented a talk on person identification in surveillance scenarios last Monday (12), at the 14th Workshop on Computer Vision (WVC). The current edition of the WVC takes place on November 12-14, at the State University of Santa Cruz (UESC), Ilhéus, Bahia.

Computer vision techniques applied to video surveillance and biometrics have been investigated for several years, with the purpose of developing intelligent and efficient systems to recognize and understand suspicious activities.

A particularly challenging task in video surveillance and biometrics is person identification, because it must be capable of discriminating subjects despite unfavorable conditions, such as occlusion and large distances between the subject and the camera. In his talk, Professor Schwartz discussed state-of-the-art approaches to address these challenges.

Schwartz is the coordinator of the Smart Sense Laboratory, which focuses on large-scale surveillance based on visual and sensory data. He advises several undergraduate and graduate students and has projects funded by agencies such as CAPES, CNPq and FAPEMIG and companies such as Petrobras, Samsung, Hewlett-Packard and Maxtrack.

In its 14th edition, the WVC brings together researchers, postgraduate and undergraduate students who are working in computer vision. The event is organized by the Graduate Program in Computational Modeling in Science and Technology (PPGMC) and the Image and Action Group (IMA) of the State University of Santa Cruz (UESC) and the CEPEDI Institute.