At the end of 2012, Professor William Robson Schwartz had the idea of creating a research group focused on smart surveillance to foster the field in Brazil. In January 2013, the Smart Surveillance Interest Group (SSIG), currently Smart Sense Laboratory, was born in the Department of Computer Science of the Federal University of Minas Gerais (UFMG). Since its first meeting, attended by its only four members at the time, much has changed. The group has expanded not only in members, but also in focus. In addition to smart surveillance and biometrics, the research topics now include computational forensics.

In its five years of existence, the group has achieved an extensive academic production, with publications in the main international journals and conferences in the world.

The Smart Sense Laboratory develops projects with support from government agencies such as the National Council for Scientific and Technological Development (CNPq), the Minas Gerais State Agency for Research and Development (Fapemig) and the Coordination for the Improvement of Higher Education Personnel (Capes). The group also works on R&D projects in partnership with private companies such as Samsung, Petrobras, Hewlett-Packard and Maxtrack. Such partnerships allow the group to advertise its work and transform it into more direct benefits to society, by means of new products and technologies.

Through this link, our brand application manual is available, with information on icon design, logo and icon usage, size, clearing space, typography and colors. Various versions of the logo are available here.

The proposed invention aims to encode contextual information for video analysis and understanding, encoding spatial and temporal relations of objects and the main agent in a scene.

Start of the R&D project with Petrobras 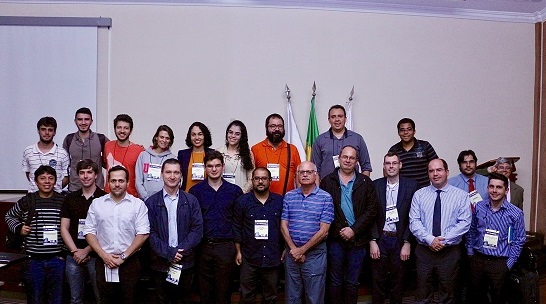 Detection of Changes in Land Scenes Using Aerial Images, by Marco Tulio Alves Rodrigues, member of Sense from 2013 to 2016

2nd place on the Workshop of Undegraduate Works  of the 26th Conference on Graphics, Patterns and Images (SIBGRAPI) to Cássio dos Santos Júnior, for the work “Detecting Unenrolled Subjects in Face Galleries”

Foundation of the research group