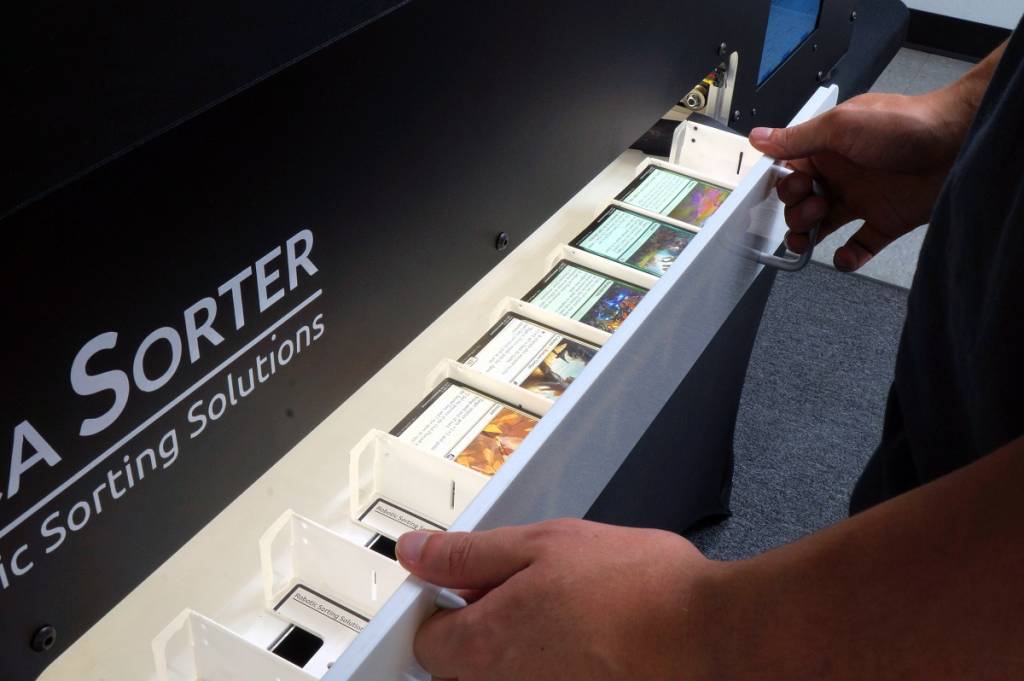 Cassio Elias dos Santos Junior, member on the Smart Sense Lab from 2013 to 2016, is one of the founders of Sorting Robotics, a company that recently built a robot to help online resellers and card stores to organize massive collections of cards from Magic: The Gathering. Cassio, who previously built a popular Magic card-scanning app for Android, has as his partners in Sorting Robotics Nohtal Partansky and Sean Lawlor, both of whom were systems engineers at the NASA Jet Propulsion Lab.

If you are wondering why a robot is necessary to help on this job, some numbers about the game can help you understand. Released in 1993, Magic was the first trading card game and, by 2015, the estimate was that there were about 20 million players worldwide, and over twenty billion Magic cards produced only in the period from 2008 to 2016. They include creatures, enchantments, sorceries, and other classes, the number of unique cards until April last year was 19,989.

Without extensive specific knowledge about the game, painstaking research and manual organization, the machine is able to identify each card and sort by different criteria. Sorting can be done alphabetically, by the set a card is from (white, blue, black, red, green, colorless, or multicolored) or by its resale value, as pulled from TCGPlayer, an online collectible gaming store. However, the developers are open to helping with custom sorting logic. The machine can load up to 1,000 cards, which can be sorted in less than two hours. Additionally, the system provides a spreadsheet summarizing the card’s data.

Holding a Master’s degree in Computer Science, Cassio solved the card-scanning stage in which cameras and computer vision algorithms are employed to identify the cards. Once this is done, a pneumatic system with polished surfaces and silicone suction cups moves the cards from pile to pile with limited contact, to avoid damaging them. The system uses the airflow within the machine to keep it from lifting more than one card at a time, therefore avoiding the issue of cards sticking together.

Currently, the system only sorts Magic cards, but soon it will also support Yu-Gi-Oh! and Pokémon cards.

Cassio has been dealing with Magic: The Gathering for at least five years. In 2016, Cassio’s ideas materialized in Delver Lens, a card scanner app designed to organize and share the user’s collection. The Android application is able to recognize 40,730 cards, tokens and emblems in total. It prices, buys and sells cards on platforms like TCGplayer, MagicCardsMarket (MKM) and Card Kingdom. It also provides advanced card search in the user’s collection, offline Oracle texts and manages decks. The app has been downloaded over 100,000 times and has a rating of 4.6.

Cassio Elias dos Santos holds a Bachelor’s Degree and a Master’s Degree in Computer Science, both from the Federal University of Minas Gerais (UFMG). Professor William Robson Schwartz, coordinator of Sense, supervised both his undergraduate thesis “Detection of Individuals Not Registered in Face Galleries” and Master’s thesis “Partial Least Squares for Face Hashing”.